< BACK TO OFFICE OF PROVOST 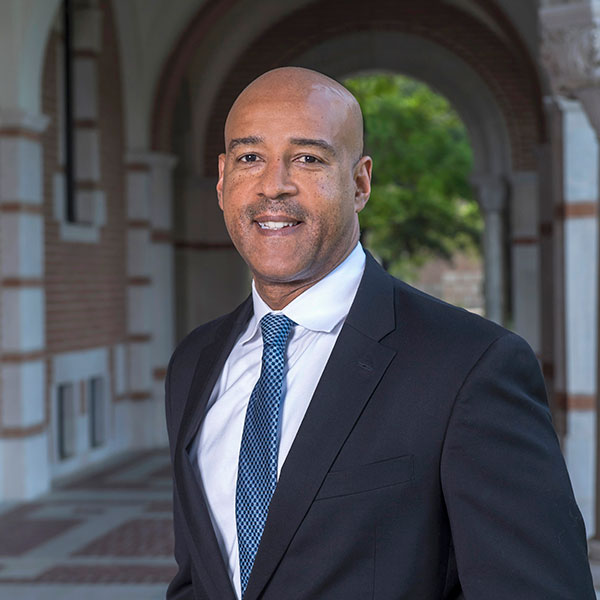 Reginald DesRoches was appointed provost of Rice University in July. In this role, DesRoches serves as the chief academic officer of the university and its 7,500 students, seven schools and more than 700 faculty. He previously served as the William and Stephanie Sick Dean of Engineering at the George R. Brown School of Engineering at Rice. In this position, DesRoches provided leadership to a top-ranked engineering school with nine departments, 137 faculty and 2,500 students.

DesRoches’ primary research interests are in the design of resilient infrastructure systems under extreme loads and the application of smart materials. His research is highly interdisciplinary and spans micro- to macro-scales. He has published approximately 300 articles and delivered more than 100 presentations in over 30 different countries.

A fellow of the American Society of Civil Engineers (ASCE) and the society's Structural Engineering Institute (SEI), DesRoches served as the key technical leader in the United States’ response to the 2010 Haiti earthquake, taking a team of 28 engineers, architects, city planners and social scientists to study the impact of the earthquake. He also has participated in numerous congressional briefings to underscore the critical role that university research must play in addressing the country’s failing infrastructure and enhancing the nation’s resilience to natural hazards.

DesRoches chairs the National Institute of Standards and Technology (NIST) National Construction Safety Team Advisory Committee (NCST) and is on the advisory board for the Natural Hazards Engineering Research Infrastructure (NHERI) Simulation Center and the California Department of Transportation Seismic Advisory Board. He previously served on the National Academies Resilient America Roundtable (RAR), the Global Earthquake Modeling Scientific Board and the National Science Foundation Engineering Advisory Council. In recent years, DesRoches has testified before U.S. House and Senate subcommittees on the science of earthquake resilience, and he has participated in Washington, D.C., roundtables for media and congressional staffers on topics ranging from disaster preparedness to challenges for African American men in STEM fields.

DesRoches received the Presidential Early Career Award for Scientists and Engineers (PECASE) in 2002 — the highest honor bestowed upon scientists and engineers in the early stages of their careers. Most recently, he was a recipient of the Distinguished Arnold Kerr Lecturer Award in 2019, gave the John A. Blume Distinguished Lecture in 2018 and received the 2018 Earthquake Engineering Research Institute Distinguished Lecturer Award — one the highest honors in the earthquake engineering field. He is a recipient of the ASCE Charles Martin Duke Lifeline Earthquake Engineering Award (2015), the Georgia Tech Outstanding Doctoral Thesis Advisor Award (2010), the ASCE Walter L. Huber Civil Engineering Research Prize (2007) and the Georgia Tech ANAK Award (2008), the highest honor the undergraduate student body can bestow on a Georgia Tech faculty member. He was elected a member of the National Academy of Engineering in 2020.

In 2014, DesRoches became Georgia Tech’s Faculty Athletics Representative, serving as the liaison between the university and its athletics department. He worked closely with the athletic director and university leadership — including the president, provost and senior vice provost for academic affairs — to formulate policies affecting intercollegiate athletics on campus. His responsibilities also included representing the institute to the Atlantic Coast Conference (ACC) and the National Collegiate Athletic Association. He was appointed to the ACC leadership team as vice president of the conference for the 2016-2017 school year.